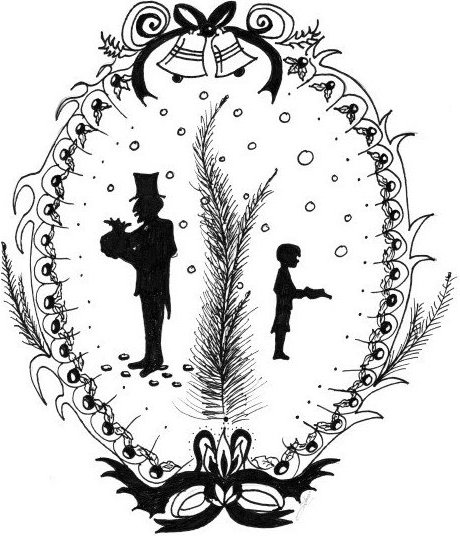 A CHRISTMAS CAROL by Charles Dickens - this simple phrase brings a smile to most people´s face and why not? It might be the best short story ever written, or the best loved, or the best known or the most enjoyable, it certainly has to be performed as Dickens himself knew.
It´s December and we must have our pudding, our parsnips and our Cristmas Carol. The story actually created our modern idea of Christmas, it influences Christmas, it is part of Christmas and it reminds us that there is more to Christmas than a shopping and eating festival.
The story is enormous fun but it is also surprisingly serious. Dickens warns that unless despair and poverty are banished from London the City will burn in flames. Scrooge is frightened half to death and Marley is forever damned.
Any director or dramatist who turns their hand to this most famous story will soon have to confront this problem: how to do justice to Dickens rather serious themes and still provide the Christmas feast of laughter and joy that public want, even demand!
All we can do is take you down the alleys that Dickens travelled, through a London that defined modern life because it was the first megalopolis, an urban nightmare where the very air was unfit to breathe. (The famous London fog was simply smoke). The wealthiest city in the world was the city with the most poor in the world.
This was a contrast that Dickens dedicated much of his life and work to exposing. Today the truly poor have been baniched to the Third World, London and its like are more comfortable places in which to live but we would do well to remember the message of A Christmas Carol: that the Christmas Spirit is joyful because it shares its joy and its feast with others, especially the poor. The play is for them and for you.
A CHRISTMAS CAROL is one of the most popular stories ever told. In retelling it we wanted to create something original and full of Christmas spirit. So we turned to the spirits. It seemes to us that the supernatural dimension of the tale often suffers in stage versions.
The ghosts usually become minor characters in favour of the living - who are easier to portray. This is a pity, because the tale is one big ghost story, "the air is full of phantoms, wandering hither and thither in restless haste!" cries Scrooge.
It can be argued that hardly any of the scenes in the story "really" happen. We are shown the death of Tiny Tim as a "shadow of what might happen" but other scenes are shadows too - a shadow play for the instruction of Scrooge. These shadows are manipulated by the Ghosts and Spirits, who are all part of a benign plot to reform Scrooge.
Christmas Carol is a magical tale, so we have gone for the magic. If we have cut some well known characters and scenes we have done so on good authority. Charles Dickens himself performed a solo version of the piece many times. He ruthlessly cut and rearranged his own story. Dickens´ final script survives and runs to thirty four pages, barely one fifth of the published original. We hope you enjoy our spirited version of this classic tale. Merry Christmas.
Paul Stebbings